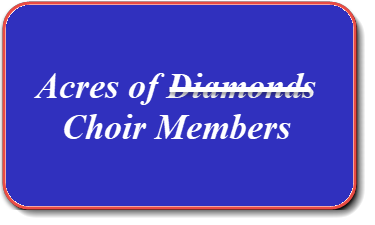 Conwell heard the story told by an Arab guide while in the Middle East.  Acres of Diamonds describes the life of a Middle East farmer who sought to be rich.  He sold his farm and traveled the world in search of riches.  After years of futile searching, the farmer died a poor man.

Later, the man who purchased the farm discovered that just below the surface of the farm was a diamond mine with acres of diamonds, and he became wealthy beyond measure.  If the farmer had stayed in his own farm, he could have reached his dream of becoming fabulously wealthy!

That is still a good answer, but there is more to the story.  Your Acres of Diamonds (choir members) are sitting in the pews in front of you every Sunday!

Every church of which I am familiar, has Acres of Choir Members sitting in the congregation every Sunday who would give their right arms to sing in the choir.  The problem is they do not read music and do not know when to turn the page.  They are not going to embarrass themselves!  Teach them to read music and they will overflow your choir loft!

At my first church after seminary, I heard a fellow named Jerry sing at a party.  Jerry was a talented Elvis Impersonator.  I told him we could sure use him in the choir, but he said, “I could not sing in your choir.  I do not read a bit of music.”

I had just that week received music reading kits that used a programed learning technique for teaching, with little booklets and a cassette tape from the Baptist Sunday School Board named Pitch and Rhythm Kits.   These were designed to teach music reading skills in a short period of time.

Long story short, I asked Jerry to be a guinea pig for the cassette tape and 3 booklets.  About a week later he picked up a sheet of music in my office and declared, “I know 95% of what is on this page,  lines and spaces, clefs, 1st, and 2nd endings, and more!”.

Jerry joined the choir, and the next year became our choir’s President!

Every church has folks like Jerry sitting in the pews, we just need to find them.

While working for the Louisiana Baptist Convention, I set about to develop a computer version of the cassette and booklets.  It took a long time to finish, but Music Made Easy finally emerged.  I predict that any minister of music or choir director who uses Music Made Easy to teach a class Sundays at noon, providing a sandwich, a drink, and a music lesson will add members to the choir.